Warning: "continue" targeting switch is equivalent to "break". Did you mean to use "continue 2"? in /homepages/4/d174904065/htdocs/clickandbuilds/CentrePublishing/wp-content/themes/Divi/includes/builder/functions.php on line 4813
 Be Stronger Blog | CentrePublishing 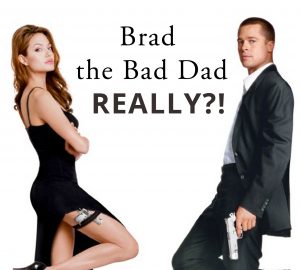 Author Roy Sheppard has been published by the Huffington Post numerous times. Yet this article was not accepted for publication. Despite being asked why it had been refused, no explanation has been given by The Huffington Post.

So, is The Huffington Post being sexist by depriving men of this information?

If, after reading this article, you believe The Huffington Post is wrong to stop this material from being viewed, please be proactive about sharing it.

Despite the global media frenzy about the Jolie/Pitt divorce, they are the only people who know what is really going on. To paraphrase former senator Hiram Johnston “The first casualty of divorce is truth”. Everything else is speculation. Partial facts from one side are not the truth.

Of the one million plus divorces that take place each year in the US, two thirds are initiated by women. Any family lawyer will tell you that those women routinely plan their divorce with the same meticulous attention-to-detail they applied to the wedding. For many this can take months, for others it takes years. Who knows when Jolie decided to divorce, or the real reasons, but you can be pretty certain it wasn’t at 35,000ft in a private jet. And was it mere coincidence that they landed in California, one of the most expensive places on earth for a man to be divorced? Think about it.

And is it beyond the realms of possibility that once she was ready, she orchestrated a fierce row, pushing his buttons, perhaps captured on video, to trigger this marital meltdown. Who knows? But it happens.

And when it does, in most cases, the husband has no idea what hit him. Or what it’s going to cost him financially and emotionally. The reputation of a good man is a valued personal asset. That’s why it’s one of the first things to get shredded by an opponents’ legal team. And they’ll do it by any means necessary.

What is happening between Jolie and Pitt is already a brilliant, copybook example of what routinely happens to non-celebrity married men every week throughout America.

When a father loves and cares deeply about the welfare of his kids, those children are invariably used as weapons of male destruction. Indeed, when you think about it, it’s only good, loving dads who would ever get threatened with not seeing the kids. Any other type of man would welcome the freedom of responsibility. The love and well-being of Pitt’s children is one of his weak spots. She and her lawyers know this. And they’ll exploit it to the full.

Next item in the divorce lawyers’ ‘box of tricks’ is to encourage the wife (or her people) to imply or accuse him of child abuse. It doesn’t matter if it’s true or not. If you can get the FBI to investigate – that’s absolutely fantastic. Other wives have been known to fabricate evidence if it helps her win a higher financial settlement. But the objective is always the same – just paint the man in the worst possible light. If he truly loves his kids, being falsely accused of abusing them is an awesome way of hurting him even more. It’s a neat trick that’s so easy to pull off. And in this case, feeding a hungry global media machine, guarantees even more positive press for Saint Angelina, and more negative press about Pitt’s shortcomings as a father.

Jolie is allegedly demanding full custody of the six children with visiting rights only for Pitt. This achieves a number of purposes; she is seen to be a strong, loving mother who needs to ‘protect’ the children – from him. This further implies, he must be a ‘bad’ man. Apparently he’s bad because he had a heated argument with a difficult teenager. Of course, no decent parent would ever do that.

These extreme and unreasonable demands are common ploys at this stage in divorce proceedings. It’s also a negotiating position. Later, she may agree to give him more time with the children – but only in return for something else.

All this is part of a very popular tactic used by divorce lawyers to ‘grind down’ their opponent so much, that over time, when the final negotiations take place, the husband will agree to almost anything, in order for ‘this thing to go away’. The wife wins. It’s very predictable. A bit like the average Hollywood movie.

Next year there will be another million divorces in America. Will your marriage be one of them? Perhaps you are one of the 600,000 or so women who are planning their exit right now. As an unsuspecting man, how sure are you that your wife isn’t one of those women?

This Jolie/Pitt Hollywood script has already been written. Ultimately, Brad Pitt will lose. But like many decent men, he’ll do whatever it takes to look after his kids. If he’s ever allowed to see them of course.

Roy Sheppard is a British author who writes extensively about good, bad and ugly relationships. He is co-author (with Mary T Cleary) of a 2007 book about protecting yourself against women with malicious intent. For more information visit www.CentrePublishing.com